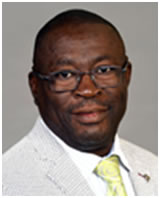 He obtained his matric certificate from Nkomazi High School, and got an Honors Degree in Governance and Leadership from the University of the Witwatersrand.