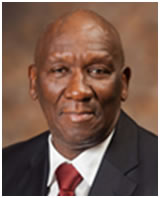 Current:
Mr Bheki Cele is Minister of Police a position he has held since 27 February 2018 and was re-appointed on 30 May 2019.
Past:
He was previously the Deputy Minister of Agriculture, Forestry and Fisheries from 26 May 2014 until 26 February 2018. From July 2009 until October 2011 Mr Cele was the National Commissioner of the South African Police Service. In 1994, he was elected to the KwaZulu-Natal Provincial Legislature as the Chairperson of the Portfolio Committee on Safety and Security. He was later appointed as Chairperson of Chairpersons in the KwaZulu-Natal Legislature. From 2004 to 2009, he was a member of the Executive Committee for Transport, Community Safety and Liaison in KwaZulu-Natal. In this capacity, Mr Cele distinguished himself in a number of areas, including: finding solutions to the taxi conflicts in the province, leading successful anti-crime campaigns, and promoting road safety on provincial roads and highways. He has also championed rural development, through prioritising road infrastructure development to previously neglected communities

Current:
Mr Cele was a member of the National Executive Committee of the African National Congress

Personal Interests/Awards/Membership:
He is a founding member of the National Education Union of South Africa and has vast experience in the field of education.