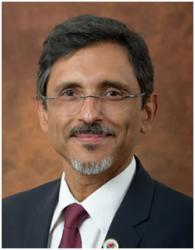 Past:
Mr Patel was active for many years in the anti-apartheid and labour movements and in social dialogue institutions. He headed the Southern African Clothing and Textile Workers Union (SACTWU), which provided a range of services and social benefits to workers and their families and built a significant stake in the economy through its investment strategy. He served on the governing body of the International Labour Organisation (ILO) for a decade, in which capacity he was spokesperson on employment and social policy for many years. He was one of the drafters of the ILO's Declaration on Social Justice for a Fair Globalisation in 2008 and a number of ILO policy documents and instruments. Locally, he led the labour team in the finalisation of a number of the country's labour laws, including the Labour Relations Act in 1995, as well as key economic documents such as the Framework for South Africa's response to the International Economic Crisis, adopted by Nedlac in February 2009.

Personal Interests/Awards/Membership:
His past board and council memberships include the National Economic Development and Labour Council (NEDLAC), the Congress of South African Trade Unions (COSATU), the SA Labour Research Institute, the Commission for Conciliation, Mediation and Arbitration (CCMA), the Council of the University of Cape Town (UCT), the Financial and Fiscal Commission (FFC) and Proudly South African. He served on the Judicial Services Commission joint interview panel for appointments to the Labour Court and the Labour Appeal Court.