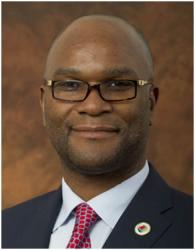 Past:
He was elected as the first Branch Secretary of ANC in Klaarwater in KZN since 1990 and has been a member of Parliament from 2002. He has been a member of the Klaarwater Youth Organisation from the age of 15 in KZN between 1982 and 1983; and as a Chairperson of the Klaarwater Youth Organisation from 1987 to 1989. He has also served as a Shopsteward of Food and Allied Workers Union (FAWU) where he was recruited into the underground work of the ANC as part of Operation Vula between 1988 and 1989. He was arrested during Apartheid Regime's state of emergency in 1989; and later he was elected as Secretary of the South African Youth Congress (SAYCO) in Southern Natal and as a Chairperson of the Southern Natal Unemployed Workers Union, an initiative of Congress of South African Trade Unions (COSATU) between 1989 and 1990 respectively. He became Regional Secretary of the Southern Natal African National Congress Youth League (ANCYL) from 1990 to 1992; and he was elected to the NEC of the ANCYL and served in its NWC as Secretary for organization from 1994 to 2001. Later in that year he was deployed into the ANC National Organising team during the period 2001 to 2002.