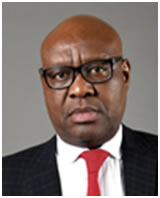 Past:
He served the youth and UDF structures in the 1980s in the then Southern Transvaal region where he played a key role in re-establishment of the ANC and SACP structures. He joined NEHAWU as its organiser in the Vaal Branch in 1990. He was elected Regional Secretary of NEHAWU Western Transvaal in 1992. He served as NEHAWU’s Assistant General Secretary in an acting capacity in 1994 and was eventually elected to that position in 1995. He became General Secretary in 1998 after being elected in the congress held in Durban. He was re-elected to this position in 2001, 2004 and again in 2007.