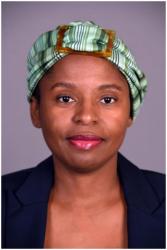 Current:
Khumbudzo Ntshavheni is the Minister of Small Business Development of the Republic of South Africa from 29 May 2019.
Past:
Political Career:

Past:
She has vast work experience in Strategic Management, Information Technology, Change Management, and Communication & Marketing. She is the founding Director and Chairwoman of Nkho Trading a transport business with interests in property development. Ms Khumbudzo Ntshavheni served as the Municipal Manager of Ba-Phalaborwa Municipality in Limpopo, a position that she held from April 2008 until November 2010 . Her previous professional responsibilities include Tourism Manager: Trade and Investment Limpopo and Chief Information Officer for the Department of Local Government and Housing (Limpopo), Spokesperson to the Premier of Limpopo, Lecturer at the University of South Africa.

She holds a MBA degree from Bradford University in the United Kingdom (2008). Her other qualifications include BA Hons Development Studies (1999) and BA Hon Labour Relations (1999) both from the University of Johannesburg former RAU.