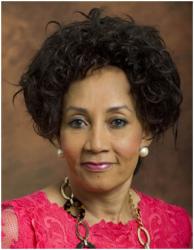 Current:
Ms Sisulu was appointed as Minister of Human Settlements, Water and Sanitation on 30 May 2019.
Past:
She was Minister of International Relations and Cooperation from 27 February 2018 to 25 May 2019. Ms Lindiwe Nonceba Sisulu was the Minister of Human Settlements of the Republic of South Africa from 26 May 2014 until 26 February 2018. In 1992, Ms Sisulu became a consultant for the National Children's Right Committee of the United Nations Educational, Scientific, and Cultural Organisation. In 1993, she worked as director of the Govan Mbeki Research Fellowship at the University of Fort Hare and from 2000 to 2002, she served as head of the Command Centre for Emergency Reconstruction. Ms Sisulu was a member of the Management Committee, Policing Organisation and Management course of the University of the Witwatersrand in 1993; a member of management of the Sub-Council on Intelligence, Transitional Executive Council in 1994, and chairperson of the Parliamentary Joint Standing Committee on Intelligence from 1995 to 1996. Prior to her appointment as Minister of Public Service and Administration, Ms Sisulu has served as Deputy Minister of Home from 1996 to 2001. She was Minister of Intelligence from January 2001 to April 2004; Minister of Housing from April 2004 to May 2009; and Minister of Defence and Military Veterans from May 2009 to June 2012. She was Minister of Public Service and Administration of the Republic of South Africa from June 2012 to 25 May 2014.

Current:
Between 1975 and 1976, Ms Sisulu was detained for political activities. She subsequently joined Umkhonto we Sizwe (MK) and worked for underground structures of the ANC while in exile from 1977 to 1978. In 1979, she received military training specialising in military intelligence. In 1981, Ms Sisulu taught at Manzini Central High School in Swaziland and in 1982, she lectured at the Department of History of the University of Swaziland. From 1985 to 1987, she taught at Manzini Teachers Training College and she was a chief examiner of History for Junior Certificate Examinations for Botswana, Lesotho and Swaziland. In 1983, she worked as sub-editor for The Times of Swaziland in Mbabane. Ms Sisulu returned to South Africa in 1990 and worked as a personal assistant to Jacob Zuma as head of the ANC?s Department of Intelligence. She also served as Chief Administrator for the ANC at the Convention for a Democratic South Africa in 1991 and as administrator of Intelligence at the ANC Department of Intelligence and Security in 1992. She has been a Member of Parliament since 1994. She has been chairperson of the Inaugural of the African Ministerial Conference on Housing and Urban Development since 2005. Ms Sisulu is member of the National Executive Committee of the African National Congress (ANC) and a member of the National Working Committee of the ANC. She was a trustee of the South African Democracy Education Trust; trustee of the Albertina and Walter Sisulu Trust; and a member of the Board of the Nelson Mandela Foundation.

Personal Interests/Awards/Membership:
Ms Sisulu was awarded the Human Rights Centre Fellowship in Geneva in 1992. Her project for the United Nations Centre resulted in the University of the Witwatersrand School of Business setting up a training course to upgrade the policing skills of MK members. She received a Presidential Award for the Breaking New Ground in Housing Delivery Strategy by the Institute for Housing of South Africa in 2004. In 2005, she received an award from the International Association for Housing Science in recognition of outstanding contributions and achievement towards improving and solving the world's housing problems. Ms Sisulu has published the following works: * South African Women in Agricultural Section (pamphlet). York University in 1990 * Women at Work and Liberation Struggle in the 1980s * Themes in the Twentieth Century South Africa, Oxford University Press. 1991 * Women Working Conditions in South Africa, South African Situation Analysis. National Children's Rights Committee. UNESCO. 1992 * Housing Delivery and the Freedom Charter: The Beacon of Hope, New Agenda and Second Quarter. 2005.