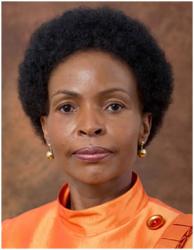 Past:
She has been a member of the African National Congress (ANC) National Executive Committee (NEC) and National Working Committee (NWC) since 2007. She has been a provincial convener of the Progressive Women's Movement in Limpopo since 2007. Ms Nkoana-Mashabane has been an active member of the United Democratic Front and served in the various structures of the Mass Democratic Movement and the ANC underground structures in 1980s. After the unbanning of the ANC in 1990, she served the party in various structures including the ANC Women's League(ANCWL) and actively participated in the re-launch of the ANCWL in the country. She has served as a chairperson of the ANCWL in Limpopo and she became a member of the of the ANCWL from 1992 to 1995. She has also served as a High Commissioner to India, servicing Sri Lanka, Bangladesh, the Maldives and Nepal from 1999 to 2005. From 2004 to 2008, she served as a member of the NEC and NWC of the ANCWL, between 2004 and 2008, she was a deputy secretary-general of the ANC in Limpopo and MEC for Local Government and Housing in the province. Between 1994 and 1995, Ms Nkoana-Mashabane was a Member of Parliament in the National Assembly. She was subsequently deployed in diplomatic service and was appointed high commissioner to Malaysia, servicing the Philippines and Brunei from 1995 to 1999.