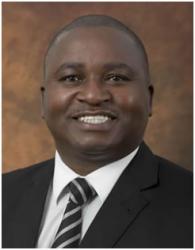 Current:
Mr Skwatsha is the Deputy Minister of Rural Development and Land Reform of the Republic of South Africa, as from 26 May 2014
Past:
Political Career:

Current:
He is a Member of Parliament for the African National Congress. He is also a member of National Executive Committee (NEC) of the African National Congress (ANC). Mr Skwatsha has occupied various leadership positions in many liberation organisations in pursuit of restoring the dignity of the previously disenfranchised majority and to bring about the country's liberation. He was a leader of the Congress of the South African Students (COSAS), the student movement; led the youth movement through the Cape Youth Congress (CAYCO) and the South African Youth Congress (SAYCO). He was part of the leadership collective of the United Democratic Front (UDF). He joined the ANC underground structures in 1981. He was provincial chairperson and later a National Executive Committee member ANC Youth League. He has served the ANC as both Western Cape Provincial Chairperson and Provincial Secretary. He is currently a member of the ANC National Executive Committee. Mr Skwatsha was elected to the Western Cape Provincial Legislature in 2004 where he served as MEC for Transport and Public Works between 2004 and 2005. Thereafter he was the Deputy Chief Whip of the Provincial Legislature untill 2009. He has served in the Rules Committee and the Health portfolio committees.

Deputy Minister Skwatsha matriculated at Fezeka Senior Secondary school in Gugulethu, Cape Town and then enrolled at Fort Hare University for a BA degree, but due to political turmoil at the campus at the time he could not finish his studies. He subsequently completed his BA degree at the University of the Western Cape (UWC) in 1990. He also has a Teacher's Higher Diploma in Education (UWC). He taught at Andile Primary school in New Crossroads. He completed a Legislative Sector leadership course at Wits (2013)