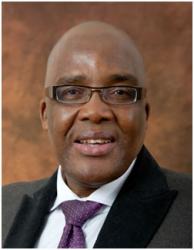 Current:
Dr Pakishe Aaron Motsoaledi was appointed as Minister of Home Affairs from 30 May 2019. He was the Minister of Health from 26 May 2014 until 25 May 2019. He is also a member of the African National Congress (ANC) National Executive Committee.
Past:
Dr Motsoaledi has also served as a member of the Limpopo Provincial Legislature from 1994 to 2009; as a member of the Limpopo Provincial Executive Council (MEC) for Education from 1994 to 1997; MEC for Transport from 1998 to 1999 and MEC for Agriculture, Land and Environment in 1999. Dr Motsoaledi has been the Minister of Health since 11 May 2009 to date.

Dr Motsoaledi holds a Bachelor of Medicine and Surgery from the University of Natal. He attended high school education at Setotolwane High School.