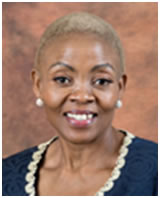 Current:
Past:
Ms Pinky Kekana was appointed as Deputy Minister of Communications on 27 February 2018. Ms Pinky Kekana is the former MEC of Limpopo Roads and Transport. Ms Kekana was a member of the Ad Hoc Committee on the Filling of Vacancies in the Commission for Gender Equality, a position she held since 16 November 2016. She is also, among others, a member of the Standing Committee on Finance (National Assembly Committees), a post she has held since June 2014. She has been a member of the National Assembly since 21 May 2014. As the Deputy Minister of Communications and someone from a rural town, Kekana understands and recognises the vital importance of bridging the Digital divide between people living, working and travelling in regional and remote parts of the country and those metropolitan cities. Our society is rapidly moving towards using cutting edge technology and more people are getting access to the internet year on year. Kekana believes that rural South Africans should have access to 21st century communications to run their businesses, complete their studies and connect with family and friends. As the Secretary General of PAWO, Kekana is committed to ensuring that all African women, regardless of where they live, have access to opportunities that will benefit them and their local communities. Kekana was elected to the Provincial legislature in 1999 and was re-elected in 2009. She has served as the Executive Mayor of Waterberg District and a MEC for Roads and Transport as well as a MEC for Economic Development, Environment and Tourism. In her role as a Member of Parliament, Kekana has been a part of a number of committees most notably the Standing Committee on Finance, Defence and the Ad Hoc Committee on the Filling of Vacancies in the Commission for Gender Equality. In March 2018 she was subsequently appointed as the Deputy Minister of Communications.

Pinky Kekana was born in Bela-Bela. Kekana has completed a Bachelor of Arts Degree (specializing in Education and teaching). Kekana was a teacher at Bela-Bela High School. Kekana experiences as a secondary school teacher fuelled her passion for education and South African’s young people. She is committed to improving opportunities for young South African’s, from all walks of life. As an agent for change, Kekana is committed to increasing the profile of women on the African Continent, promoting women’s and equality more broadly. She wants everyone, but particularly women and girls to feel empowered.