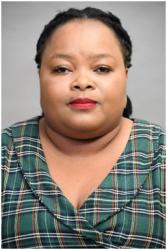 Current:
Ms Siwela is the Deputy Minister in The Presidency of the Republic of South Africa, the position she was appointed to on 30 May 2019. The Deputy Minister is also a member of parliament for the ANC.
Past:
Political Career:

Current:
In the year 2013, she served in the ANCYL Provincial Task Team (PTT) Sub-Committee on Communications. She has been a member of the National Executive Committee (NEC) of African National Congress Youth League (ANCYL) since 2015 to date.

Past:
A communicator in her own right, Ms Siweya has vast experience of working in the communications environment both as a civil servant and as a politician. She worked as the Spokesperson for the Youth Commission in Limpopo Province between 2007 and 2010. She was a Communications Manager in the office of Limpopo Premier between 2010-2016. Ms Siweya is an avid reader and a writer who has written numerous published opinion pieces on a variety of topics specifically about Africa and the world. She counts the likes of Chinua Achebe, Bessie Head and Mandla Langa, among her favourite authors.

Ms Thembi Rhulani Siweya is a youth activist and a philanthropist who is very passionate about promoting a culture of reading and writing. She is a graduate from Medunsa and is currently enrolled for an MBA degree

Personal Interests/Awards/Membership:
She Matriculated in Saint Morgens English Medium School in Mokopane Limpopo province. She was introduced to politics at an early age through student activism. She served as the Chairperson of SRC Science Faculty in Medunsa (Medical University of South Africa) and also Treasurer General (TG) for the South African Student Congress (SASCO). In 2014, she started African Unmasked, a cognitive movement established to deliberate on current affairs, especially issues relating to gender, Health, Education, governance; economics and identity. African Unmasked encourages dialogue among Africans with the aim to facilitate interdependence amongst African states. Through African Unmasked, Ms Siweya has donated learning materials such as books, school uniform and shoes to learners in various schools in all the nine provinces of South Africa. She has also been able to donate relief parcels to the victims of cyclone Idai in Zimbabwe and Mozambique between April and May 2019