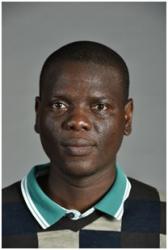 Current:
Ronald Lamola is the Minister of Justice and Correctional Services of the Republic of South Africa from 29 May 2019.
Past:
He was the Acting spokesperson of the Mpumalanga Premier from January 2011 until October 2011. The Director in the Office of the MEC of Culture Sports and Recreation in Mpumalanga from July 2009 until January 2011.

Current:
He sits in two of its most powerful structures: the NEC and the national working committee. He was elected to the NEC at the December 2017 conference.

Past:
He served as a Transversal Unit Manager at the Govern Mbeki Municipality between March and June 2009. He is the former deputy president of the ANC Youth League.

He obtained LLB from University of Venda in 2005. Has a Practical Legal training from University of South Africa in 2006. He has a post graduate certificate in corporate law from Unisa 2007-2008. He holds a post graduate certificate in banking law and the financial markets. He also has a LLM in corporate law from University of Pretoria 2013-2014. He holds a post graduate certificate in Telecommunications policy and regulation and management from Wits Business enterprise. He obtained two master's degrees from the University of Pretoria. Lamola's first master's degree was in corporate law, where he explored the regulation of property syndication schemes. His research looked at the roles of regulators in the regulation of taking deposits from the public, the conflation of the Companies Act, Banks Act and the Reserve Bank Act. Lamola got his second master's in extractive law in Africa from the University of Pretoria in 2018. His research focused on corporate social investment by the mining and energy sector. His research suggests that the Department of Minerals and Energy's enforcement unit is inadequately resourced to ensure compliance with the social labour plans by companies in the sectors.