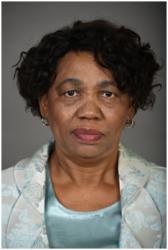 Current:
Ms Angelina "Angie" Matsie Motshekga is the Minister of Basic Education in the Republic of South Africa since 11 May 2009 and was reappointed to this portfolio on 26 May 2014.
Past:
Political Career:

Personal Interests/Awards/Membership:
Ms Motshekga was an educator at Orlando High School from 1981 to 1983, lecturer at the Soweto College of Education from 1983 to 1985 and lecturer at Wits University from 1985 to 1994