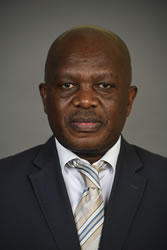 Current:
Past:
Member of Parliament, Free State delegate to the National Council of Provinces – 2014 to date and served in the following positions: Chief Whip of the National Council of Provinces (2017 to date). Members of the Inter-Parliamentary Union Assembly (2017 to date). Chairperson of the Select Committee on Appropriation in the National Council of Provinces (2014 to 2017). Member of Select Committee on Finance (2014 to 2017). Co – Chairperson of Joint Standing Committee on Financial Management of Parliament (2014 to 2017). ANC Chief Whip in the Free State Provincial Legislature (2004 – 2009). Also Chaired various ad hoc and administrative committees of the Free State Provincial Government, Including the Governance, Administration, Security and International Affairs Cluster; Sub Committee on the Drafting of the Free State Growth and Development Strategy; Subcommittee on Mining Interventions; and Subcommittee on African Peer Review Mechanism. Free State Member of Executive Council – Finance (2009 – 2014). Free State Member of Executive Council – Public Works, Roads and Transport – 2004 – 2009. Served Parliament (National Assembly) – 1999 – 2001. Worked as an official in the Free State Department of Public Works and Local Government Respectively (1995 – 1999)

Past:
In 2000 he was appointed by the National Executive Committee of the ANC to serve in the Provincial Interim Leadership Core (ILC) of the ANC following the dissolution of the PEC, part of this included him being the convenor of Motheo Region. Has been an ex-officio member of the ANC PEC since 2002 by virtue of being ANC Chief Whip in the Provincial Legislature AND MEC from 2004 until 2014. He has strong roots in the youth movement dating back to his years in COSAS and SAYCO from the 80s. He was elected the regional chairperson of the ANCYL in the Southern Free State from 1991 until 1994. He was elected into the provincial executive of the ANCYL in 1994 And served as political education officer until 1996. In 1996, he was elected Provincial Chairperson of the ANCYL until 1998. In 1998, he was elected into the ANCYL NEC and served in the NWC as the National Secretary for Governance and Legislative Affairs until 2001.